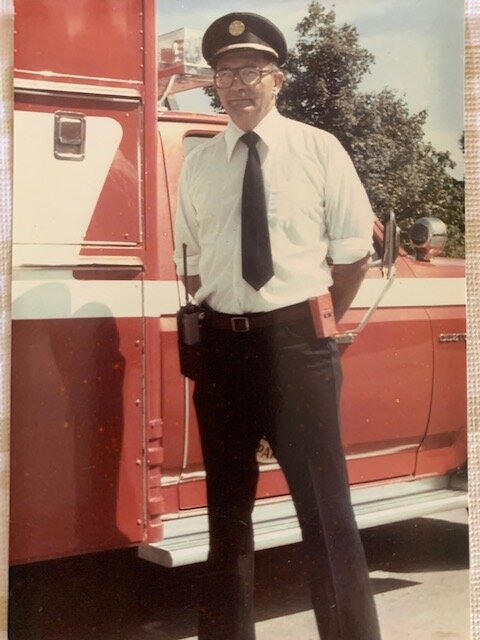 Peacefully, after a brief illness, at Strathroy Middlesex General Hospital on August 29, 2021 Dave Pollard passed away in is 89th year. He was surrounded with the love of his family; his wife June of 37 years, his loving children Kathy (Bob), Mike (Susan), Janet (Wolf), Steve (Cindy), Valerie (Richard) and Debbie (Kane). Cherished grandpa to 12 grandchildren and 19 great grandchildren. Predeceased by his first wife Rose, parents Murial and Jonathan Pollard and siblings Bob and June.

Dave was always there for his family and friends to help. He was a great man and always welcomed everyone. Dave started out working with the Canadian Canners in Strathroy, he then moved to Lambeth accepting the title as Stationary Engineer at Produce Supply “aka” The Corn Plant “aka” Hardee Farms “aka” Cobi Foods. He worked as the plant engineer for 35 years. During his time in Lambeth, he joined the Lambeth Volunteer Fire Department, while also working with the OPP and EMS. He volunteered for 35 years and retired as the Fire Chief.

Dave and June loved their winters in Florida, starting out in a small van and eventually moving to a park model for their summers at Starks Golf Course. Their later years were spent in Strathroy at Twin Elms in yet again another trailer before Dave’s move to Sprucedale Care Centre.

The family would like to thank the staff at Strathroy Middlesex Hospital 1 South and Sprucedale Care Centre for all the care and compassion shown to Dave.

A private graveside service will take place at Forest Lawn Cemetery. As an expression of sympathy and in lieu of flowers, donations to Salthaven Wildlife Rehabilitation & Education Centre Inc. would be appreciated by the family. Online condolences and donations may be made at www.strathroyfuneralhome.com. Arrangements entrusted to DENNING’S OF STRATHROY.

Share Your Memory of
David
Upload Your Memory View All Memories
Be the first to upload a memory!