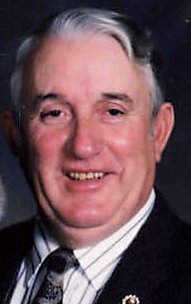 A private family service will be held at DENNING’S OF STRATHROY on Saturday, January 16th, 2021. Interment to follow at All Saints Cemetery, Strathroy. As expressions of sympathy, donations may be made to the Canadian Cancer Society or Strathmere Lodge Auxiliary Fund.

Gene was born and raised in Newburg, Ontario where he received his education up to Grade 9 at which he attended Grade 10 in Napanee high school. He studied there until grade 10 at which time he became involved in Cadets which became more interesting than school. He travelled to Ipperwash, Ontario for a couple of summers and then he spent a summer in Banff. While in Newhamburg he also played hockey for Napanee which he also chided his grandchildren that he played for the NHL. The Napanee Hockey League.

Gene left school to start a career on the Canadian National Railway. A friend of the family trained Gene to be a telegrapher and he went from Napanee to Capreal. Coming home on weekends he would join his friend to go to dances in the area where he met his spouse, Fran of Tweed, Ontario at a dance in Read, Ontario.

They were married in St. Carthagh’s Church on May 24, 1958. They took up residence there while Fran worked at the Bank of Montreal. Gene’s work soon took him to Stratford and then back to Belleville where their first child, Patricia was born. While in Belleville an insurance agent convinced Gene to sell insurance for Prudential Insurance, which he did. Gene found sales a rewarding career and moved his family to Napanee where he was about to begin his insurance career. He was soon moved to Kingston, Ontario as the manager of group sales agents. However, Gene loved the sales so he soon reverted back to sales and moved back to Napanee where three more children, Stephen, Barry and Mary were born. While in Napanee, his oldest child started to a one room school which he was not very happy about. He convinced the school board and the township they needed to build a new school which they did over a period of 2 years. Thus H.H Langford was built.

Again, excelling in sales, Gene was promoted to manager, but this time the moved was to London, Ontario. In London he had several agents working for him but noticed an opening in one of the areas which was in Strathroy. His independence and his ability to sell again moved him to Strathroy, Ontario. Where he met John Scholtes. Their friendship brought them together to open their own insurance brokerage where they could sell not only life insurance but general insurance as well. They began in Gene’s garage and soon moved to Southdale mall and excelled as a company known as Scholtes, Donohue Insurance. John Scholtes moved on to his own brokerage due to death of a friend and John bought the business. Gene again sold his spouse the idea to be his partner in the business which then became Donohue and Donohue Insurance. While in Strathroy he joined the Knight’s of Columbus and was involved in All Saints Catholic Church.

In 1986 Fran retired and selling her share to Ron Kulchski and in 1987 Gene sold to Mark Prangley. Gene wishing to retire bought a boat and decided he would retire and fish. This was his passion for several years fishing in Lake Erie where he spent most of his summers. Then he decided to fully retire, and he and his wife moved to Bayfield.

While in Bayfield, Gene found a new business, he started his own woodworking and enjoyed making all kinds of small tables, cabinets, you name it, Gene made it.

Share Your Memory of
Michael
Upload Your Memory View All Memories
Be the first to upload a memory!