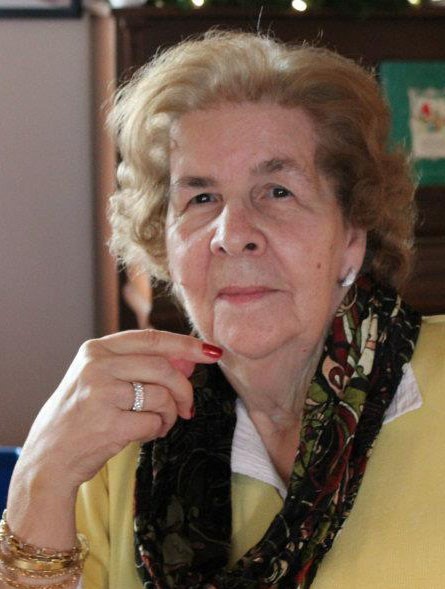 Helen was born on a farm outside of Galt in 1927. She always told us she could hoe corn in her sleep. After receiving a Bachelor of Arts (Honours) from the University of Toronto in 1949, Helen moved to Ridgetown to become a French teacher at the local high school. She met Ken and they married on August 16, 1952. In 1957, they moved to Strathroy where they purchased the local newspaper, The Age Dispatch. Between 1958 and 1965, Helen took a sabbatical from teaching to raise her daughters, Aileen and Susan, but she was never one to sit still. She was the first Welcome Wagon Lady in Strathroy, a job she loved. She volunteered at the Strathroy Library.

She started a conversational French group for women, which was very popular. She worked to get French instruction into the public schools. In 1965, Helen was hired to be a French and German teacher at Strathroy District Collegiate Institute and soon became head of the Modern Languages Department. After retiring from teaching, Helen had a successful real estate career with Appleby Real Estate. In their spare time, Helen and Ken enjoyed sailing, travelling, music and going to the Stratford and Shaw Festivals every year. Helen never lost interest in the topics she enjoyed, such as the stock market, politics and family news.

Cremation has taken place. A Celebration of Life will be held at a later date. Those wishing to make a donation in memory of Helen are asked to consider the Middlesex-Elgin Branch of the VON or Strathroy Middlesex General Hospital Foundation. Arrangements are entrusted to Denning’s of Strathroy. Messages of condolences for the family are welcome at strathroyfuneralhome.com.

Share Your Memory of
Helen
Upload Your Memory View All Memories
Be the first to upload a memory!